Winter renovation on a Golf Course

You’ve seeded your lawn with Perfect Green and that beautiful green grass has sprouted. Taking a trip outside you walk around the premises, enjoying the smell of fresh grass as the sun rises, turning morning dew into steam. Suddenly you see a round puffy dirt mound shaped like a miniature volcano. Walking along you see what looks like a raised tube beneath the earth, and stamp your foot in frustration. Moles can disrupt fresh sod in Olympia, WA, but there are some ways to handle them.

Learn to Live with Moles:

Though you may have the desire to show them whats what, and keep your grass flat and serene, sometimes it’s easier to live with them. When it comes to holes, it’s easiest to fill them back in, flatten them, and recover them with fresh grass seed. Problems will usually occur in the same area, and any plants that have been partially dug up can be re-positioned and potted back in the soil. Surface ridges can be flattened with your foot and depressions can be filled in with sand and reseeded. 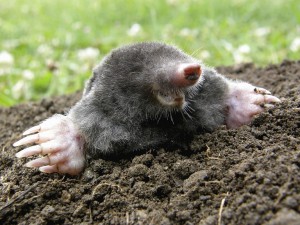 Now that you know what you are up against, you can make an informed decision regarding moles and your lawn. For more information on lawn maintenance and the fastest growing seed to combat mole holes, contact your local dealer for fresh sod in Olympia, WA.